MoLight is a smart digital lighter which helps you reduce the tobacco consumption and provides the motivation you need on the journey to quit smoking tobacco.  MoLight connects with a mobile application via bluetooth, which keeps all the track of your consumption, provide community support and shows all the achievements you have made so far. 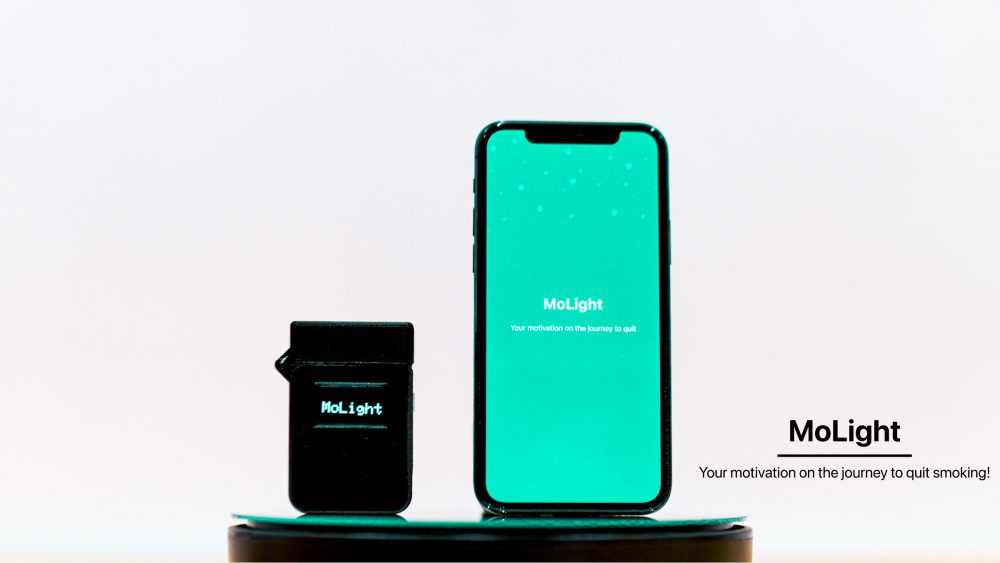 Throughout human history, smoking has been practiced in various forms. Many ancient civilizations such as the Chinese, Indians, and Persian have been known to hold religious rituals that involve the smoking of tobacco and other hallucinogenic drugs since as early as 5000BC.[1] Over time, smoking started to be adopted for recreational purposes and started to grow in popularity. Today the practice has been commercialized and is very widely practiced to the point that it is categorized as a global health concern. This paper reviews this practice by giving important facts and figures of the situation and methods to mitigate its prevalence and negative effects. It also reviews an innovative solution through which this problem can be solved by applying information technology.

The World Health Organization (WHO) ranks tobacco as one of the most used drug substances in the world, estimating that twenty percent of the adult population smoke tobacco.[1] Generally, the habit is most prevalent among men compared to women, but this gap varies across countries and age groups.[2] Smoking is more prevalent in western countries, especially among populations with mental health issues or societal problems such as a high crime rate or homelessness.[3]

The Center for Disease Control (CDC) estimates that twenty-four percent of people aged between 25- and 35-years smoke cigarettes making up the age group with the most cigarette smokers, while the population over sixty years representing the lowest. [1] Concern has been raised from the rising numbers of youth who indulge in the practice. The CDC estimates that in 2020, five percent of high school students aged 14 to 17 had smoked cigarettes in the past month.[2] The CDC reports that this number is mainly boosted by the tobacco industry’s innovation, especially though flavored cigarettes and vape pens easily  become a trend among young users.[3] Studies by the Center show that over ninety percent of avid cigarette smokers who are adults had already tried smoking before 25. With the adoption of such a bad habit at an early stage in life, concerns are raised on the long-term effects of this practice on individuals and the society as a whole.

Cigarette smoking has a variety of negative effects on the human body, which are only worsened by the prolonged use of the drug.[1] The habit is associated with chronic lung and heart diseases, stroke, diabetes, and numerous types of cancer.[2] In the United States, approximately half a million deaths per year are caused by cigarette smoking, including close to forty thousand deaths credited to second-hand exposure to the practice.[3] The habit has been found to reduce the average life span of an individual by approximately ten years.

According to studies done by the Food and Drug Association, over seventy percent of adult cigarette smokers would want to quit the United States’ habit.[1] Out of this population, approximately fifty percent had attempted to quit in the past year, with a success rate of less than ten percent being able to kick the habit for more than nine months.[2] As the negative effects of cigarette smoking continue to take a toll on personal lives and society as a whole, there is a need to develop protection measures. These measures can be taken at the government level through policies that reduce the rate of consumption of the drug.

The government has taken action relating to reducing production distribution, supply, and demand of the drug. For example, Article 6 – 14 of the WHO Framework Convention on Tobacco Control seeks to regulate the demand of the drug by instigating measures such as price and tax, packaging and labeling of tobacco products, disclosures of the content of tobacco products, and promotion of training and public awareness of tobacco.[3]

Similarly, the government seeks to regulate the supply of tobacco by instituting Article 15 through to 17 of the WHO Framework Convention on Tobacco Control[1]. They include measures that relate to the sale of the product to minors, the illegal trade of tobacco, and the provision of support for economically viable activities. These measures taken by the government majorly target the sale and availability of the product to consumers.

There are other popularized ways of preventing the habit of smoking. One of the most common ways  is the use of alternative methods of consuming cigarette content, such as nicotine chewing gum and nicotine pouches.[2] The main idea behind such products is to provide the substance that keeps people addicted to smoking (Nicotine) without exposing the user to the harmful effects of smoking cigarettes.[3] Technology has also been incorporated in the pursuit of reducing smoking with innovations such as Pavlok, a wrist-worn device that sends light electrical charges through the user’s hand whenever it senses the hand, mimicking someone’s movement smoking a cigarette.[4] Such measures are helpful to some extent, but do not completely solve the problem.

Why do Preventive Measures Fail?

There is mass awareness of smoking’s harmful effects even among cigarette smokers, yet;  people continue to engage in the habit. Further, research has found that most people who smoke do not enjoy it, with more than half of the population wanting to quit completely.[1] According to a study done by the Ontario Tobacco Survey, it takes the average smoker about thirty attempts at quitting the habit before they are successful. Experts argue that this is not the smoker’s fault but rather the methods employed to quit.

For most quitting methods, such as the Pavlok wristband, the main interaction used to alter the behavior is through running an electric current into the body. Experts advise that using punishment as a method of altering human behavior is highly ineffective.[2] Other prevention methods focus on distracting the user from smoking by using devices such as portable games and sewing kits. These methods were ineffective as they only distract the user physically but do not abolish the urge to smoke. As such, there is a need for a more effective prevention strategy.

I used the findings of this research to inform my project for the reduction and prevention of smoking. Through the research findings, it is clear that punishment and distractions are ineffective ways of dealing with the problem. As such, I came up with the hypothesis that cigarette smokers need support and incentives to overcome the habit. In this context, it is important to note that the right time for intervening and the right mechanisms of incentivizing is crucial to my project’s success.

Close social support and attachment are one of the most crucial factors in overcoming any type of addiction.[1] As such, I designed my project to allow for interaction and support from an individual’s community. I figured that one of the most ‘must have’ objects is a cigarette lighter for a smoker,  which made it a perfect device to help in quitting.

The idea is to have a digital lighter that can pair up with a mobile device through an application called MoLight. The lighter can be set to a specific number of lights per day, for example, five. Whenever one feels the urge to smoke, they will take the lighter, which will have a thoughtful motivational message from a close acquaintance such as a best friend or sibling. This will precondition the mind to quit smoking. For the message to be effective, the user must listen to the message completely before being able to use the lighter. 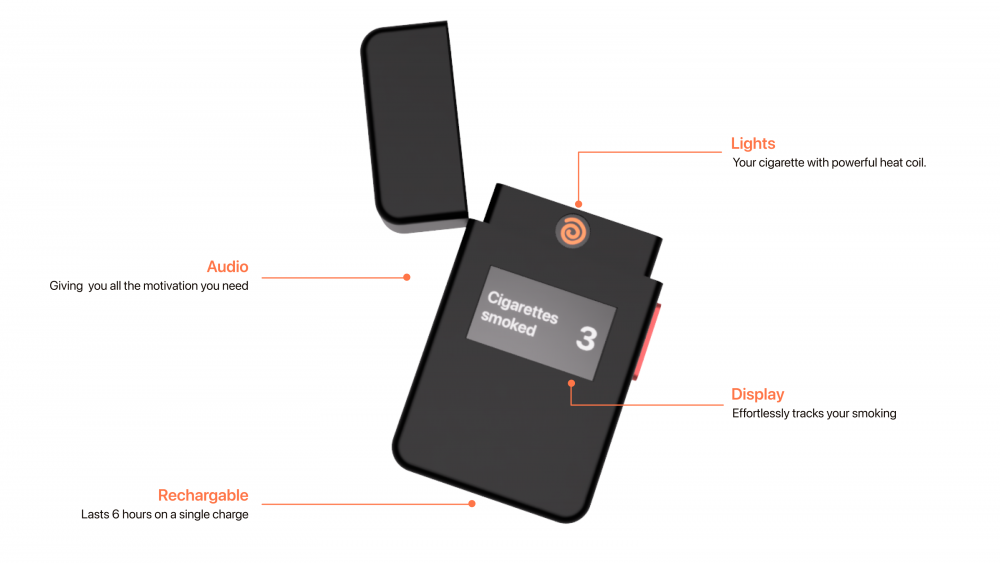 The MoLight mobile application allows the user to pair with the lighter and invite friends and family to support their journey to quit smoking by sending them encouraging messages and tracking their progress. The application is also designed to be user considerate as the user can set specific periods in the app when they are allowed to smoke a cigarette. Further, the application also features a reward system whereby users on the journey to quit are given financial rewards when they smoke less than what they are allowed but also deducts money from them when they surpass their threshold. Other mobile applications in the market, such as Kwit and Smoke-Free, have similar reward features and also include motivational messages. However, these apps lack the element of community support, which is crucial to the quitting process. 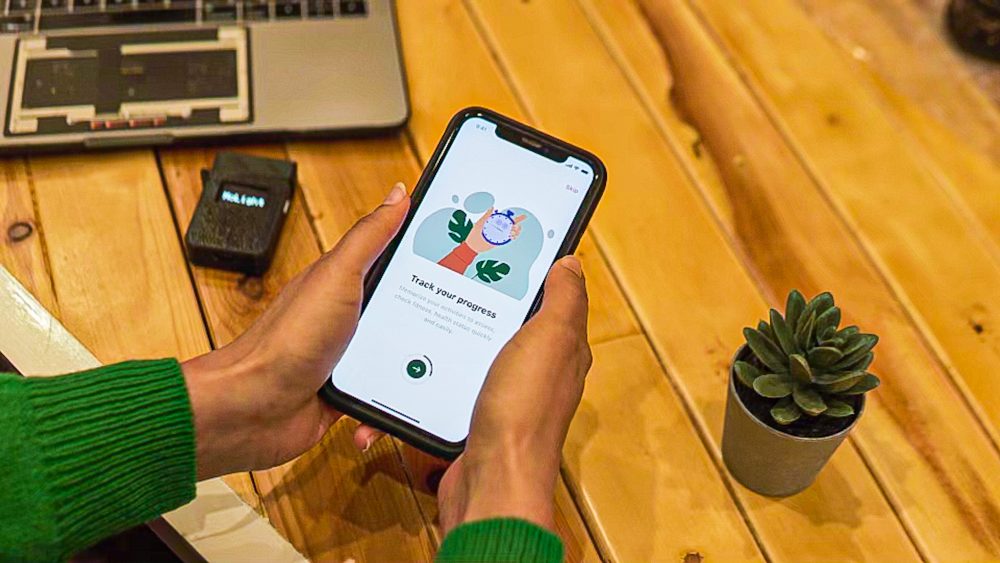