Prompt: How do visual images enhance or create meaning? What can signs and symbols convey? Address these questions by using the concrete elements of design and observational drawing to explore and develop a visual language. 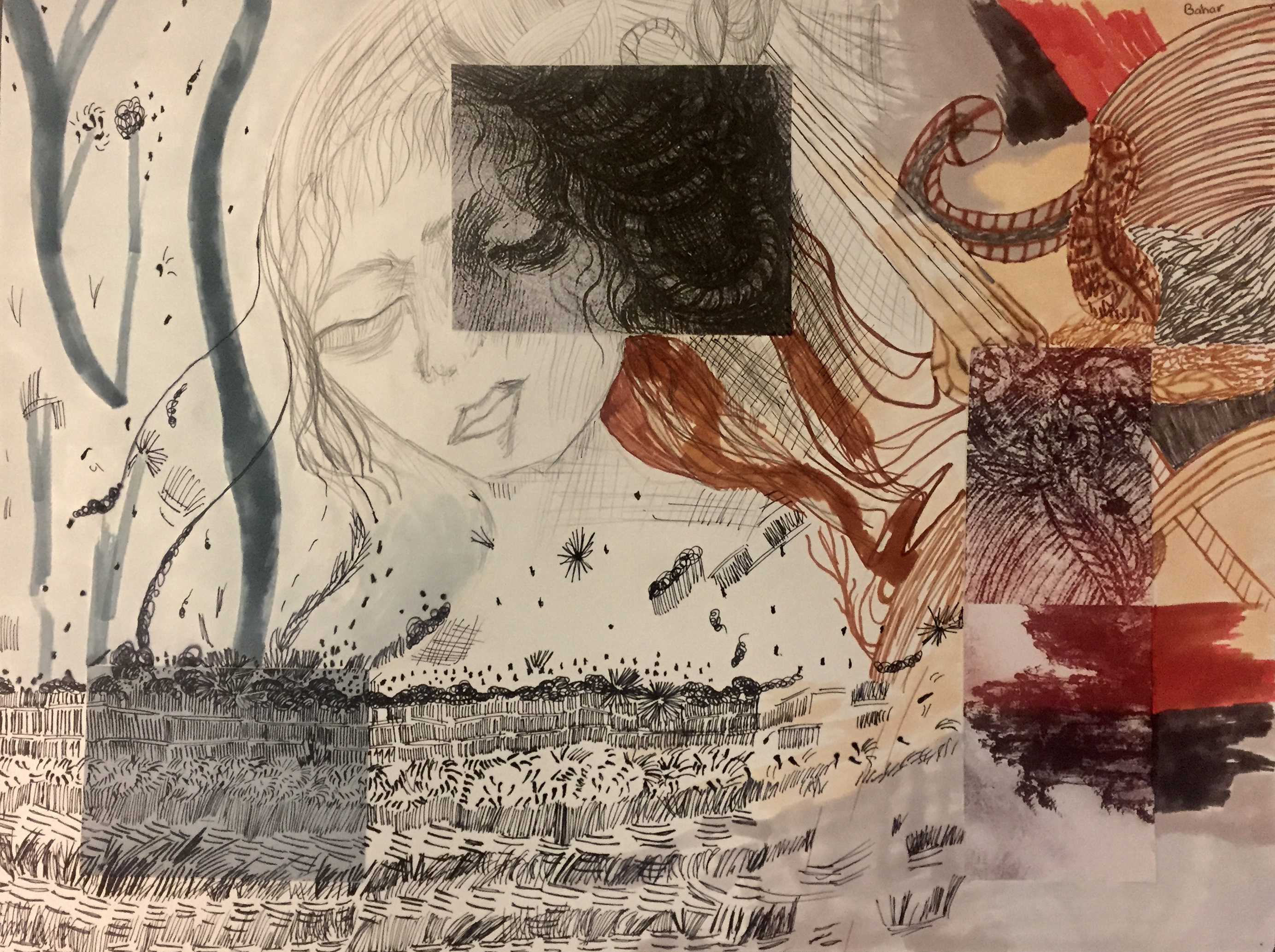 For the “Camouflage Extended” assignment we took different elements of the three pieces that we made: one of our plant studies, the camouflage study, and our Photoshop study(which I ended up using a photo of my face) to create a single piece by mixing the various patterns or “languages”. First, I focused on the plant studies and chose one that I thought stood out the most and then by using the pen tool on Illustrator, I tried to change the way the flower looked by making it more abstract and pointed than it already is; I also created different gradations of it. Second, I picked different elements from the camouflage study as the study itself was a mix of various patterns and altered them by either making them more detailed, making them more abstract and less detailed, or changing the color. Third, I used a selfie of myself instead of the Photoshop piece which looked similar to the photo that I had worked with and I cropped it so that I could blend it with the languages that I had taken out of the two other studies. Moving on, I pasted all of the elements into one page and tried to create a composition by centering the photo and turning it into one color, and surrounding it with all the elements and patterns that I had created so that it calms down the piece as all of the pasted pieces are blended with each other.

For most of the time, I tried to make sure that the elements had something common with each other so that I could connect them to each other. I also tried to incorporate the idea of mixing color with black and white, and mostly pastel colors in the shades of pink and brown. I utilized different brushes for the mark making such as on some of the elements so that they stand out and so that there is a contrast and a difference between the elements. I also used Photoshop to mask the photo that I had inserted of my face by masking it and filling it with one neutral color so that it demonstrates the idea that at the end of the cycle all those patterns and elements turn into one. At the same time, I wanted to use the photo as the “centre” and “bigger” shape so that it connects all the pieces surrounding it together.

Because I come from three different cultures, I feel as though I am divided into three parts yet somehow the three parts of me are connected to each other by the elements that I am composed of. Thus, I tried to use the same concept in this piece by using myself in the centre and utilizing only one neutral color which also matches with some of the patterns surrounding it, to show the feeling of being mixed which is portrayed by all the elements and the “languages” that I have made which are also connected and are surrounded by the centre image.


Taysia De Mesa, "The Constitution of Identity, Relationships, and Legacy through Remembered Experience"
Next: